Inventory: Digitalization in Germany and Brandenburg

According to a Bitkom survey, 90 percent of German companies see the process of digitalization as an opportunity. Three-quarters of companies have to face the challenge of enabling higher levels of automation in their business. Over 38 percent of larger companies already use cloud services or big data analytics. All in all, Germany has a lot of work to do when it comes to digital development, as broadband expansion or coverage with advanced VHCNs (very high capacity networks) are still a long way from being completed. In terms of VHCN coverage, just like the digitalization of public services, Germany currently takes 21st place. In terms of dead spots and broadband expansion, Germany ranks 8th and in terms of digitization as a whole it ranks 12th in the EU. According to the Digital Index 2019/2020, over 85% of Germans are now networked, but only about a quarter of all medium-sized companies pursue a digitalization strategy at all. Companies also find it very difficult to fill ICT (information and communication technology) positions as required.

Brandenburg’s digitization strategy was adopted in December 2018. A study entitled “Work 4.0 in Brandenburg” found in a survey of 1050 companies in the state that over 87 percent of them employ digital solutions in their daily business. A fifth of them is already fully networked and digitalized. As part of the “Digitalization in Brandenburg” campaign, seven lines of action for active policy intervention with innovation and growth potential were developed. These lines of action include IT infrastructure with high-performance, digital applications in education and science, digitalization in business and work, networking in rural areas, digital change in public administration, the area of consumer protection and digital security, and finally the potential for the strengthening of democracy through increased participation and social commitment by citizens. 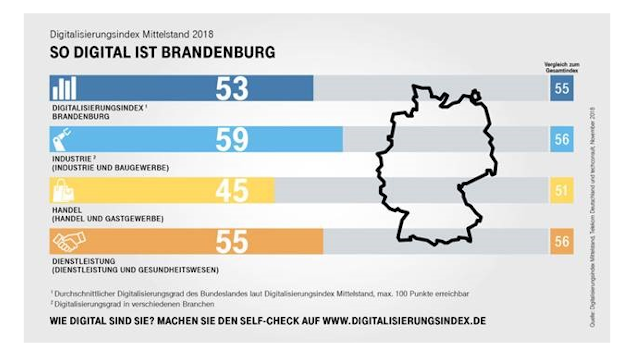 The necessity to catch up on digitalization in the state of Brandenburg exists primarily in services and retail. The digital transformation is a prerequisite for one’s own competitiveness: 41 percent of medium-sized companies in Brandenburg have internalized this awareness and anchored digitization in their business strategy. 35 percent implement individual digital projects. However, this is relatively low when compared to the 45 percent of those surveyed in all of Germany that already name digitalization as part of their business strategy. The proportion of companies in Brandenburg that have paid little or no attention to digital change is above average. 17 percent are in the planning phase, eight percent have not yet dealt with the topic. With 53 out of 100 possible points, Brandenburg is two index points below the overall economic average of all federal states. These are the results of the “Digitalization Index 2018”.

The index reflects the recognized relevance of digitalization by the companies and its degree of implementation: the companies surveyed could achieve the top score of 100 points if they assigned the highest relevance to all digital fields of action and were maximally satisfied with the implementation. The industry/construction cluster is one of the pioneers in Brandenburg with 59 points, scoring even three points better than the national average. It is mostly those companies that have settled in the industrial belt around Berlin that set the pace for digitization in Brandenburg. Smart production buildings and machines, processes, and products networked across the entire supply chain are part of everyday life for the digital model companies in the industry. Even forestry, which is so important for Brandenburg, has arrived in the 4.0 world and enables more efficient and ecological forest management with digital technologies.

With 55 index points, the services/healthcare cluster is one point below the national average. With Mobile.de, Paypal and Ebay, digital model companies have also settled in Brandenburg. The retail/hospitality sector cluster has the lowest digital performance in Brandenburg. It only scores 45 points, which is six index points below the national average.

The study also shows: for a successful digital transformation, companies need more than a technological basis. They are also dependent on employees that can deal with digital technologies and are positive about the change. 57 percent of the respondents in Brandenburg consider the digital competence of their employees to be just as crucial in the future as the technical or social skills of their employees (national average: 52 percent). 46 percent believe that this is an important success factor for their company, whereas only 34 percent of those surveyed think that their workforce is optimally qualified (national average 35 percent). Companies cannot meet their expert needs on the external labor market either. Only 22 percent are satisfied with the availability of digital specialists. Nevertheless, 36 percent of companies take the initiative and promote the digital competence of their employees. On the national average, 43 percent of those surveyed offer further training opportunities.

In Brandenburg, as in many other German regions, many support programs do not reach medium-sized companies. 25 percent of the companies in Brandenburg are not familiar with the regional funding programs; 46 percent are not satisfied with it. 17 percent of those surveyed do not know that the chambers of industry and commerce are committed to technology transfer. 33 percent are satisfied with their activities (the national average is 31 percent). Only 75 percent of surveyed are aware of information events organized by telecommunications and IT providers.