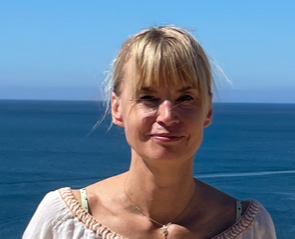 For most of us, learning just one foreign language is difficult enough. Stina Sandgren, an experienced interpreter at the European Parliament (EP), speaks about half a dozen of the EU’s 24 official languages. Talking with her on WebEx, I immediately sense her love of languages and her passion for interpreting.

Asked about what inspired her to become an interpreter, Ms Sandgren tells me about her fascinating experiences living abroad and picking up one European language after another. Born in Sweden, Ms Sandgren’s family moved to her father’s new workplace in Liberia, West Africa, when she was only six years old. There, she learnt English at an international school. Back in Sweden for high school, Ms Sandgren started learning French and went to Paris to become a model before going to university. She studied French and English literature and sociology at the prestigious Sorbonne University in Paris, located in the famous Quartier Latin. Pursuing her interest in Romance languages, Ms Sandgren started learning Spanish there and went on to the renowned Parisian interpreting school ESIT (École Supérieure d’Interprètes et de Traducteurs).

As a newly qualified interpreter, Ms Sandgren then seized the opportunity of Sweden’s imminent accession to the European Union in 1994 and passed the exam to join the Parliament. “Lifelong learning” may be just another of the EU’s many buzzwords, but Ms Sandgren truly is an example of how it can work. Soon after taking her place at the interpreters’ booth, Ms Sandgren added Spanish to her portfolio before learning Italian, which she describes as her favourite language. Working with colleagues from the Danish booth, she also learnt the language of Sweden’s neighbouring country. This prompts me to ask Ms Sandgren about learning German (but who could blame her for omitting that one?). It is even more impressive that she is currently tackling Dutch. As if that were not enough, Ms Sandgren tells me that as a yoga-enthusiast she is interested in Sanskrit, and that she may brush up her Russian when she retires.

Interpreting at the Parliament

With 25 years of experience, Ms Sandgren clearly knows the Parliament better than most MEPs. I ask her what makes this place so special. Ms Sandgren, of course, tells me about the EP’s unique multilingual culture, but also that her work gave her insights into virtually all aspects of parliamentary life. Interpreting for group meetings, committee meetings, plenary session, and many conferences, Ms Sandgren says it was fascinating being a ‘fly on the wall’, following political discussions from so close. Another aspect which makes her work so exciting is the cultural events and the famous people visiting the Parliament, including royals and popes, presidents, prime ministers, and actors. She tells me an amusing anecdote about the Dalai Lama visiting the EP, accompanied by a certain Richard Gere, a Buddhist himself. Ms Sandgren remembers the ‘traffic jams’ caused by this visit, with (mainly female) colleagues rushing to the meeting, taking up the visitors’ seats and the interpreter booths being crowded with people wanting to see, of course, the Dalai Lama, but also Richard Gere.

I want to know more about how Ms Sandgren’s work at the Parliament has changed over the years and ask her about the prestige of the language of her heart, which is French. While she admits that she would love to see French replacing English as the lingua franca of the EP, Ms Sandgren concedes that this will not happen. At the time of Sweden’s accession, the language of Molière was still the most widely spoken one. This status quickly eroded after the 1995 enlargement and vanished with the 2004 “big bang” enlargement to Central-eastern Europe. This trend will not be reversed post-Brexit, Ms Sandgren predicts, regardless of French efforts. German is the EU’s most widely spoken mother tongue (18%), ahead of French (13%). Interestingly, however, Ms Sandgren has observed that German MEPs have increasingly turned to using English in the Parliament over the past decade. Artificial Intelligence (AI) may be a future challenge for the profession of interpreters. Ms Sandgren admits that a few years ago she would not have believed that AI could ever replace interpreters but is not so sure about that anymore. While this may not happen tomorrow, it could not be ruled out for later. She adds that language is a very special thing, something that needs a human touch. Indeed, translators of written texts are arguably more immediately at risk of being replaced by AI than interpreters of ‘the spoken word’.

Interpreting is a challenging task, not only in terms of translating correctly what MEPs say, but also in terms of conveying how they say it. An interpreter, Ms Sandgren reminds me, must treat all MEPs equally and fairly, no matter their political orientation. Contrary to my assumption, communicating irony and sarcasm is not the biggest challenge for interpreters. Instead, cultural references like quotes from the Bible or lines from a Shakespeare play are much more difficult to handle ad hoc. Fortunately, Ms Sandgren adds, interpreting is teamwork and colleagues would always help each other out, including in the rare case that a fellow interpreter is stuck. There is, for example, the so-called “cough button”, with which interpreters can mute themselves and ask colleagues for help. To stay focused, interpreters need to take breaks regularly, with rules varying from booth to booth. Ms Sandgren explains to me that in most booths, they would interpret for half an hour before handing over to a colleague. In the Swedish booth, however, there is no fixed rule and interpreters would take turns with each new speaker. This has the benefit of staying involved in the conversation and avoiding distraction during breaks. Even when they do take a break, however, interpreters keep listening to the conversation and note down numbers, for instance, to make interpreting easier for their colleagues.

Interpreting during the pandemic

Ms Sandgren transferred from the interpreters’ booth to the visitors’ centre of the EP just before the pandemic hit. For her former colleagues, the crisis has been an immense challenge. With MEPs calling in via WebEx, interpreting remotely has led to a certain sense of disconnect from meetings. It has also had a real health impact on interpreters. Several of Ms Sandgren’s colleagues have experienced hearing problems or even tinnitus symptoms due to the poor audio quality of video calls. Interpreters were one of the very few professions permitted to work in the Parliament during lockdowns. This highlights their enormous importance for the very functioning of the EP. Covid-19 restrictions, however, also applied to booths, which could only be used by one interpreter at a time. For a profession that relies on constantly changing teams, this was quite difficult. Due to frequent cleaning, booths could no longer be continuously used. More booths that are mobile had to be set up outside meeting rooms, for example on the first floor of the Spaak building. Even so, the number of meetings offering interpretation had to be reduced.

Even in normal times, multilingualism is a challenge for the EU. Interpreters like Stina Sandgren are, therefore, indispensable for connecting European citizens with their parliamentarians by bridging Europe’s language barriers.