Sajikumar Karunakaran, IT specialist at the European Parliament 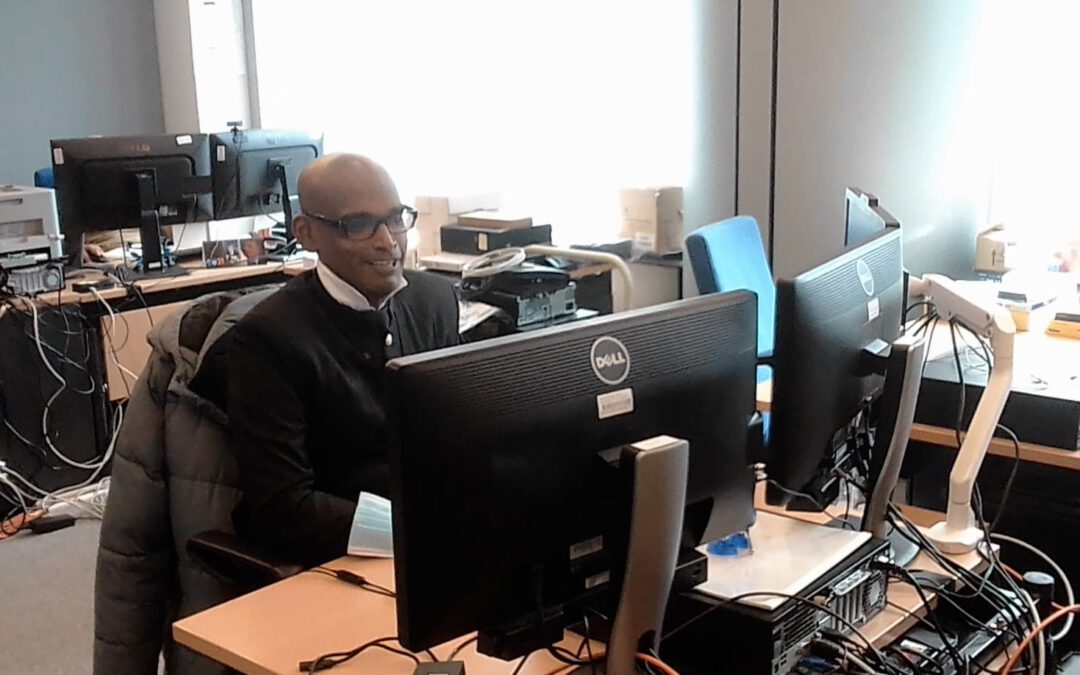 When I reach Mr. Sajikumar Karunakaran, 45, it’s half an hour before he has to go on duty for the plenary elections. The IT specialist from Düsseldorf is quite busy on election days at the European Parliament. Still, he manages to find the time to talk to me on the phone.

Mr. Karunakaran is German, but both of his parents come from India. He grew up in North Rhine Westphalia, where he went to Medical School. But Sajikumar is a traveler at heart, so he took advantage of the opportunities in graduate school to study in India, Spain, and the United States. In Spain, he found love and a reason to move to Belgium: His girlfriend wanted to study there.

Sajikumar first came to Mechelen, and since his accreditation as a doctor took some time, he decided to apply for an IT position at HP. They hired him due to his multilingual profile and trained him on the job. Following HP, he landed postings at Hertel, Canon, and ultimately at the European Parliament in Brussels. At the EP, Mr. Karunakaran is responsible for the IT needs of the Representatives, their assistants, as well as their interns. His unit, the MEP IT Support, deals with everything ranging from computer desktops to plenary votes.

During our conversation, Sajikumar answers my questions in his humble and direct manner. The man who does not celebrate his own birthdays favors the part of his work where he gets to assist the MEPs during plenary votes. “It’s a high-pressure situation”, he explains. “You’ve got little time, so you have to work quickly.” Mr. Karunakaran likes this kind of environment because he enjoys the challenge and relishes the feeling of helping the MEPs. He leaves the politics to the politicians and prefers to do his part by taking care of the technology. Sajikumar enjoys spending time with his coworkers, and when the situation allows for it they like to share a coffee. The caffeine is necessary because the EP IT job includes long hours, sometimes as long as 11-12-hour shifts.

To find balance, Sajikumar exercises. He runs, he swims, and since he’s a qualified pilot, he also flies. Does the EP facilitate exercise for its employees, I ask. The answer is yes.  Mr. Karunakaran tells me that the EP has its own gym, but sadly it is currently closed due to the pandemic. Speaking of the coronavirus: Sajikumar takes the safety measures quite seriously. He wears his mask, disinfects his hands, and takes care to respect the social distancing measures. “Others might think I’m a nerd”, he jokes, “but I want to take responsibility. If you work for the European Parliament, you have to represent Europe. You have to lead by example”.

Will he stay in Brussels for the long term? “Probably“, he admits. ”I’m quite fond of this city“. And why shouldn’t he be? Brussels is a hotspot for polyglots, and Sajikumar certainly is one. He speaks 10 languages, 6 European and 4 Asian. „Communication is important“, he claims. „Languages can open doors and in my experience, people tend to be more comfortable in their native language”. Mr. Karunakaran loves this aspect of parliamentary life. “They speak 24 languages here, and each one is respected. It doesn’t matter how many people speak the language, they are all treated equally at the EP”.

Speaking of the EP, I ask him what Europe means to him. “It’s a luxury”, he responds. Being in the EU, that’s a privilege. “We have a lot of freedoms here that people in other countries have to go without”. Sajikumar knows this from personal experience because he has seen it in Tamil Nadu, where his parents are from. Then he tells me about another part of Brussels that he loves: “There are over 170 nationalities here. We coexist together. Everyone brings their own cuisine, their own traditions. It makes for a beautiful patchwork, really“.

Before he has to leave for the plenary sessions, Mr. Karunakaran tells me one more thing about the Parliament and its location. “Brussel is the capital of Europe”, he claims. “And you can actually feel it in the air. When you leave this building, it doesn’t matter what clothes you wear, which language you speak, or what color of skin you have. In Brussels, we manage to work together and treat each other with respect. And that’s not self-evident.”