Axel Heyer, Coordinator at the Visitors´ Service of the European Parliament 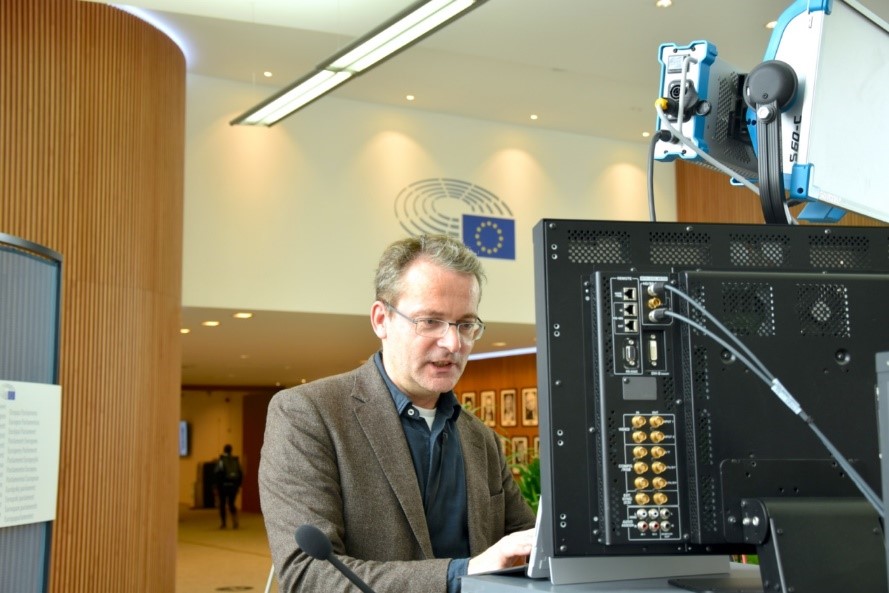 Europe is his message

You don’t have to see Axel Heyer to feel the spark. In early summer, while a pandemic is raging over the world, the 53-year old civil servant makes me smile just seconds after the phone call starts. In the conversation that follows, he tells me about his life.

Hungry for knowledge, the learned sales representative took up his studies of politics, history and French at Cologne University. His focus was on European politics, a subject he pursued after graduation. Axel Heyer worked for an internet company, then he obtained a job at Politik Digital in 1998. The project was centered on the political implications of the internet, and Axel Heyer took charge of the European dimension. He studied the political processes in Brussels and summarized them in a way that ordinary people could understand. As a reward, the project soon won the Grimme Online Award. Nevertheless, the more he reported on Brussels, the stronger Axel Heyer’s desire grew to move there. Hence, when he finally packed his bags to move to Brussels in 2002, he did not bother buying a return ticket.

Once in Brussels, Axel Heyer examined the websites of the MEPs and started forming a personal network. This aided the quality of his journalism, and when his contacts offered him entry into the Parliament, Axel Heyer did not hesitate. For eight years, he worked as a press speaker for the liberals.

His rich experience makes Axel Heyer the ideal visitors guide for German language speakers. The job requires political knowledge, self-confidence, and a good portion of humor. During the pandemic, Heyer conducts his tours online and meets challenges like black screens in his steady down-to-earth manner: “A news anchor doesn’t mind not seeing his audience either, so why should I?”, he jokes.

When I ask him about his contact to MEPs, Axel Heyer tells me it’s in his nature to talk. Especially about football. He’s been a fan of the 1. FC Köln since he was a child, and he still loves to play. So does he play in Brussels as well? Yes. In his steady manner, Heyer paints me a picture of the microcosm that is Brussel’s football. There are teams like the German La Mannschaft or the EU team 1. FC Dynamo Subsi. “Subsi?” I prompt. Axel Heyer laughs. “Yes, Subsi. See, it’s named after the subsidiarity principle”. Only in Brussels, I think.

When you listen to Axel Heyer, you want to travel to Brussels as well. „Many people tell me they’re positively surprised when they see the city”, he confides. “There are some clichés about the capital of Europe, but if you actually experience the city, it’s full of life.” Personally, he is most fond of the variety of languages spoken in the city. “It’s a wonderful place to practice because you can always find people who speak a certain language”, he marvels.

Axel Heyer is a born communicator and Europe is his message. He sees the MEPs as people who build bridges between the citizens and the EU institutions. However, Axel Heyer is also doing his part: Every day, he explains the European Union and its complicated processes to visitors of the EP. Last year, he even started a small academy for the visitor’s service where his coworkers can practice their stories and receive feedback to improve further. Once a week, they meet to discuss politics and enrich their comedic repertoire. Hence, in his own way, Axel Heyer also connects citizens with the EU.